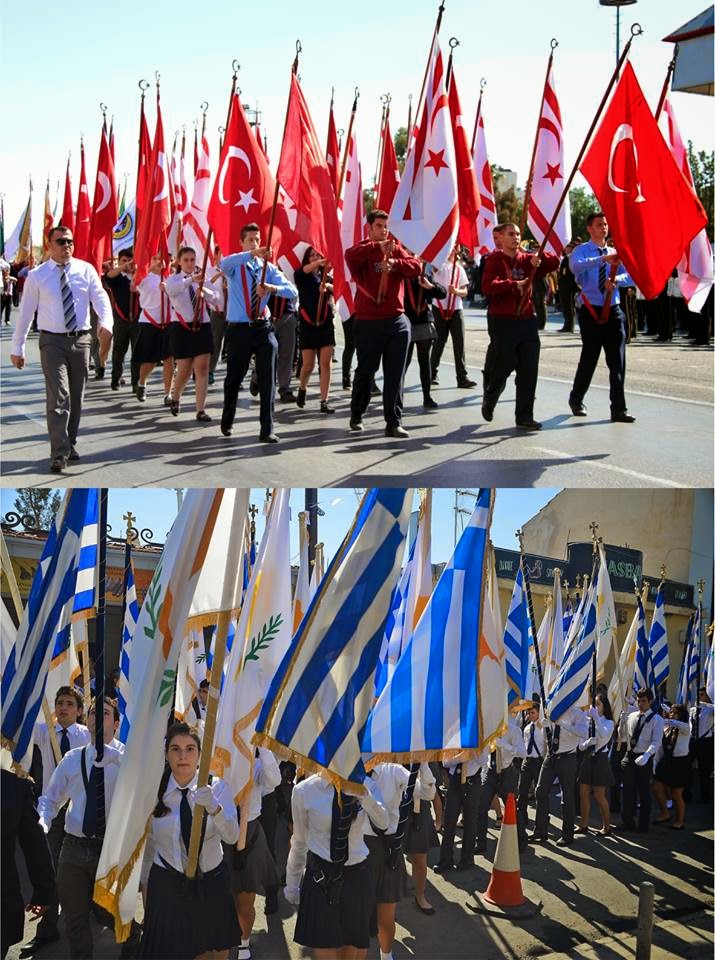 The boy chose to carry the Cyprus flag at last Wednesday’s Greek Independence Day parade rather than the school standard or Greek flag.

At nine o’clock on that same morning the three flag bearers were transported by school bus to Phaneromeni Church in Nicosia to receive a blessing.

All Nicosia and suburbs’ secondary schools, scouts, guides, football fan clubs, colleges and universities were represented, some 200 flag bearers and the ‘lost territories’ children, which always bring a tear to my eye.

Political party leaders, church dignitaries, police commanders, army special corps, generals, etc. and a congregation of elderly pious Hellenics crammed the church pews along with flag bearers to be blessed by Archbishop Chrysostomos II. The president said a few words to the congregation after shaking a ‘thousand’ hands and kissing a hundred cheeks.

At eleven sharp the march of Nicosia youth began at the moat car park, parading along Stassinou Avenue following the Venetian city walls to the Cyprus Museum, then a sharp left along Byron Avenue, past the Greek Embassy and to the packed rostrum. Some flag bearers saluted, a la raised clenched fist, the president and assembled dignitaries.

Several bands played rousing tunes intermittently, drummers drummed and loudspeakers blared out the usual military marches – a cacophony of patriotism, and for me a republic that embraces Greece so wholeheartedly that it is impossible on the day to imagine Cyprus as anything but Greek.

Most spectators (fewer than usual this year) waved the Greek flag only.

I suppose it’s the same ‘jingoism’ on the other side during Kemal Atatürk Day and the day marking the north’s unilateral declaration of independence in 1983. Brainwashed patriotism, the cause of all our woes.

This coming Wednesday is another public holiday (Cyprus National Day) with much less fuss or celebration.

Do we really believe in the existence of Cyprus when we celebrate so quietly Cyprus’ Independence on the first of October yet mark Greek Ochi Day with military parades and fanfares later that month?

Cyprus’ youth is taller, stronger and well fed than ever before, many of the lads bearded, hair styled a la footballer mode, many of the girls are studded – ears, nose and throat – but they are a proud and a visible powerhouse of the country’s youth.

But what is their future?

The boy will receive his marching orders in June and be militarily conscripted by early July. His studies will be interrupted for two years and he will have forgotten most of what he learnt at school by the time he is demobbed to pursue a course in his chosen subject at any of the universities in the republic or abroad. My fear is that if he chooses to go abroad, he might never return.

Would you after hearing the president’s speech at Phaneromeni Church last Wednesday? “The Day`s message is one of unity and struggle!” he said.

Asked about a possible announcement by the UN for the resumption of the settlement talks, the president said that the reasons for which the Greek Cypriot side has suspended its participation at the negotiating table have not ceased to exist, since the Turkish NAVTEX is still in force, and the Turkish research vessel Barbaros is still in the territorial waters of the Republic of Cyprus.

He went on to say, “any announcement for resuming the dialogue will depend on the willingness of the other side to restore the status quo ante, prior to violating the international law and the sovereign rights of the Republic of Cyprus in its Exclusive Economic Zone.”

Speaking on the commemoration of the start of the Greek independence struggle, in 1821, President Anastassiades said that, “the celebrations that take place in Cyprus today prove that the links between mainland Greece and Cypriot Hellenism are inseparable.”

But he did not mention the massacre of some 400 Cypriot ‘noblemen’, the archbishop (Chrysostomos I), five district bishops and the massive confiscation of property by the ruling Ottomans when Greece’s struggle for independence incited Orthodox Cypriots to join them.

Twenty five per cent of the population fled the island for Europe never to return, while many who couldn’t converted to Islam.

Similarities between the Ottoman massacres of 1821 and the 1974 invasion cannot be ignored. And had the British Empire never set foot on Cyprus, the island might still be Turkish territory under international law.

And there you have it – permanent partition – who wants another 41 years of today’s nonsense?

The boy loves Cyprus, but cannot see any future here until a solution is found to the Cyprob. He believes the island is drowning, and on completion of his military service, he is planning to leave for anywhere in Europe, excluding Greece.

And who do we have to thank for this present state of affairs, Theodoros Kolokotroni (Greek general and pre-eminent leader of the Greek War of Independence against the Ottoman Empire) or George Grivas and Archbishop Makarios, Dr Fazıl Küçük and Rauf Denktash?

Last Wednesday’s Greek Independence Day parade confirms for all those that were present that nous sommes tous éternellement coupable! And most of our younger generation want no part of it, but are obliged to participate by those who dictate Hellenism above all else.