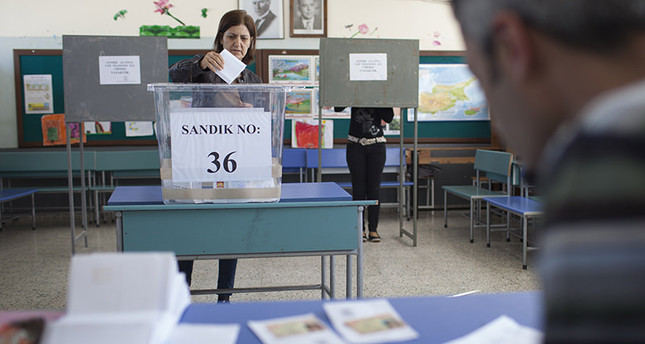 Turkish Cypriot daily Kibris newspaper (19.04.16) reports that the “assembly” of the breakaway regime in the occupied area of the Republic of Cyprus unanimously adopted yesterday the “elections and referendum (amendment) draft-law”, which is allegedly expected to improve the political culture in the occupied area of the island.
When the “law” is signed by Turkish Cypriot leader Mustafa Akinci and published in the “official gazette” of the occupation regime, the entire occupied area of the island will be turned into a “single election zone”, instead of five, which existed until now. The “candidates” will be included in a single list and the “voters” will be able to “vote” for “deputies” in the entire occupied area and not only in the area in which they live.
Turkish Cypriot daily Yeni Duzen newspaper (19.04.16) reports that the number of the “deputies” will remain the same (50) and they will be distributed according to the population of the existing occupied districts: E.g. Nicosia 16, Famagusta 13, Keryneia 10, Morfou 6 and Trikomo 5. A “voter” which votes for one party will be able to express preference to mostly half of the “candidates” of his/her party in every district. The “voter” who will chose the “combine vote” will be able to express preference to mostly half of the “candidates” of a party or the independent candidates in a district. The “voters” will be able to choose among at least 24 and mostly 50 “candidates”.
Kibris (19.04.16) reports that in order for running for “candidate” one should permanently live in an area for at least two years. If a person has changed his/her permanent residence during the past two years and has not permanently lived in an area for two continuous years, he/she will be able to run in the “elections” in the area in which she/he had lived the longest period.
Explaining the provisions of the “law” at the “assembly”, Turfan Erhurman, “deputy” with the Republican Turkish Party (CTP), said all 50 “candidates” of a party will be in one list, the area from which each “candidate” will run will be taking place in the list and every “vote” to any “deputy” of any party will include the “candidates” in all districts.
Referring to the same issue, Mustafa Arabacioglu, “deputy” with the Democratic Party (DP) argued that the “law” should be well explained to the “citizens” and that the regionalism will be abolished but the quotas will remain.
Nazim Cavusoglu, “deputy” with the National Unity Party (UBP) and self-styled minister for agriculture and natural resources, noted that the “people’s preferences” will show the extent of the change brought by the “law”.
Hakan Dincyurek, “independent deputy”, said that even those who made the “law” ask questions on how the “voting” will take place and how the calculations will be made. He added that the uncertainties regarding the “law” should be overcome.
Hasan Tacoy, also “independent deputy”, said that some problems might be solved with the single list.
Meanwhile, the People’s Party (HP) issued a written statement arguing that the new “law” includes undemocratic elements, that the use of “combined vote” will become extremely complicated and that it interferes in the choice of the “people” using their free will.
Finally, the so-called cultural association of the settlers coming from Turkey’s Black Sea area argued that the “law” will create a more complicated and more unjust “election system” and added that they might apply to the “constitutional court” for the annulment of the “law”.

@Cypriot_Puzzle @M_A_Talat The leader of the church welcomed ELAM into parliament.

@Cypriot_Puzzle Don't even say such things.....

About 6 hours ago from Androulla Vassiliou's Twitter · reply · retweet · favorite

@Cypriot_Puzzle of course. Recent meetings, CY and ISR. GR and USA. Turkey in shambles. Things are going on😉😉

About 8 hours ago from Achilles9's Twitter · reply · retweet · favorite