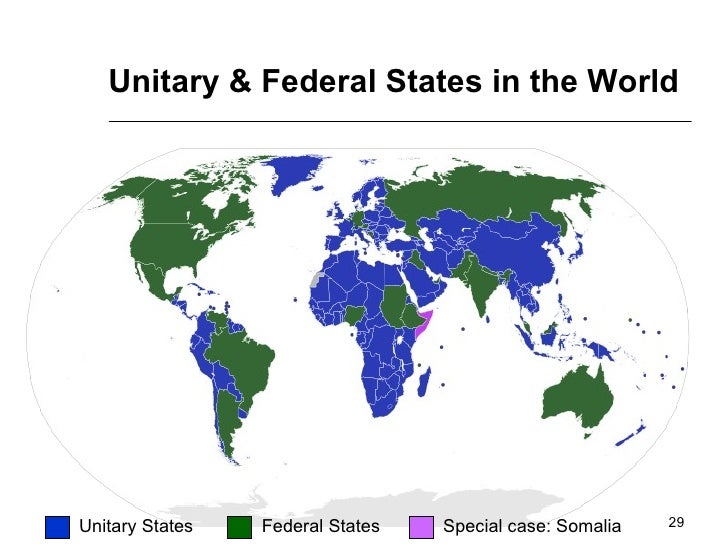 There are today 25 countries in the world (out of the 193 member states of the UN) that are federal, some of them since several centuries ago. The oldest federation is the United States of America, dating back since 1789, followed by Venezuela (1811) and Switzerland (1848), while the newest is South Africa (1996).

Nevertheless, these 25 countries are the most populous and with the largest territories. Today, 40% of the world’s population live in federal states.

During the last few decades, Belgium, Spain and South Africa have evolved from unitary states to federal states.

The high-level agreements, reached between the leaders of the two communities of Cyprus, as endorsed by numerous UN Security Council resolutions, have stipulated that the presently unitary state of the Republic of Cyprus would be transformed.

Transformed into a “State of Cyprus with a single sovereignty and international personality and a single citizenship, with its independence and territorial integrity safeguarded and comprising two politically equal communities as described in the relevant Security Council resolutions, in a bi-communal and bi-zonal federation”.

It would be helpful to look at the issue of federalism and try to familiarise citizens with the concepts involved in a federal system of governance.

We should first distinguish the different systems of state organisation.

The unitary state model, functioning in the vast majority of countries today, is a sovereign state which is governed as a single entity and where the central government exercises its power across the entire territory, constituting the highest authority.

Any administrative units, i.e. districts, exercise those powers conferred upon them by the central government. Based on the 1960 Constitution, the Republic of Cyprus is a unitary state.

A federal state is a more complex sovereign state, where power is shared between the central (federal) government and the constituent units of the federation (at least two). Therefore, there are two levels of governance in the federal state, the central and the regional, each of which has specific powers (legislative, executive and judicial) granted to them by the Federal Constitution. The single international personality of the federal state is the only subject of international law and of the rights and obligations of the state, and not the constituent units of the federation.

The confederation of states is a union of sovereign states that conclude a treaty ceding some of their powers to common institutions for certain specific actions. Today there are no confederations of states in the form that existed before (Confederate states of America, German Confederation, old Swiss Confederation).

While at the same time preserving diversity at the local constituent unit level with sufficient autonomous self-government to carry out their responsibilities for local purposes, also clearly defined in the Constitution (including culture, education, municipalities, social security, local police and public order etc).

It is widely recognised that a federal system, through emphasising partnerships and cooperation for the common good, can help build unity and establish peace and security in post conflict situations and to construct common values and an overarching identity, while still fostering a pluralist democracy by protecting and preserving the identity of diverse communities.

It is my fervent view that a federal solution in Cyprus, based on a democratic, functional, truly European (in the sense of compatibility with the acquis communautaire) and viable federal system would be the model of governance that could truly reunite the country, the people, the economy and the institutions of our country.