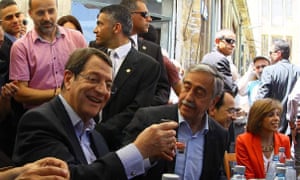 Eclipsed by the state of tumult in the region, a quiet miracle has occurred in the eastern Mediterranean, where Cyprus has come back from the brink of economic disaster in a recovery that would be the envy of its cousins in Greece.

As the race to reunite the divided island begins in earnest on Friday, in a meeting between the leaders of its Turkish and Greek communities, there is mounting evidence that the EU’s most easterly state could be heading for a new era. “The moment of truth has arrived,” says Hubert Faustmann, an associate professor of history and political science at the University of Nicosia. “The coming weeks will be decisive.”

About 12 hours ago from Sacha_Ali's Twitter · reply · retweet · favorite