Greek and Turkish Cypriots, close to a deal, may yet call the whole thing off 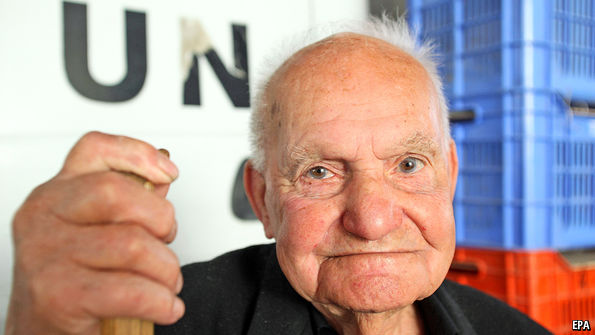 PERCHED on a hilltop a few miles from the sea, the Christian Maronite village of Kormakitis, in Turkish-controlled northern Cyprus, is running out of time. In 1974, when Turkish troops invaded the island following a Greek Cypriot coup, the town was home to some 2,000 people. Today about 110 pensioners remain. They spend their time at the café joking in the indigenous dialect, a blend of Arabic, Aramaic and Greek. Their children, who have moved to the richer Greek part of the island, visit on holidays. A Lebanese priest leads prayers at the newly restored church. Every fortnight a UN convoy arrives from Nicosia, the capital, carrying supplies.

@Cypriot_Puzzle ELAM and police in the South are colluding

@Cypriot_Puzzle but it is a terrorist army base for 42 years!!!

About 15 hours ago from Glafkos Cariolou's Twitter · reply · retweet · favorite

@Cypriot_Puzzle that's a very big chapter....does this mean the negotiations are nearing the end?