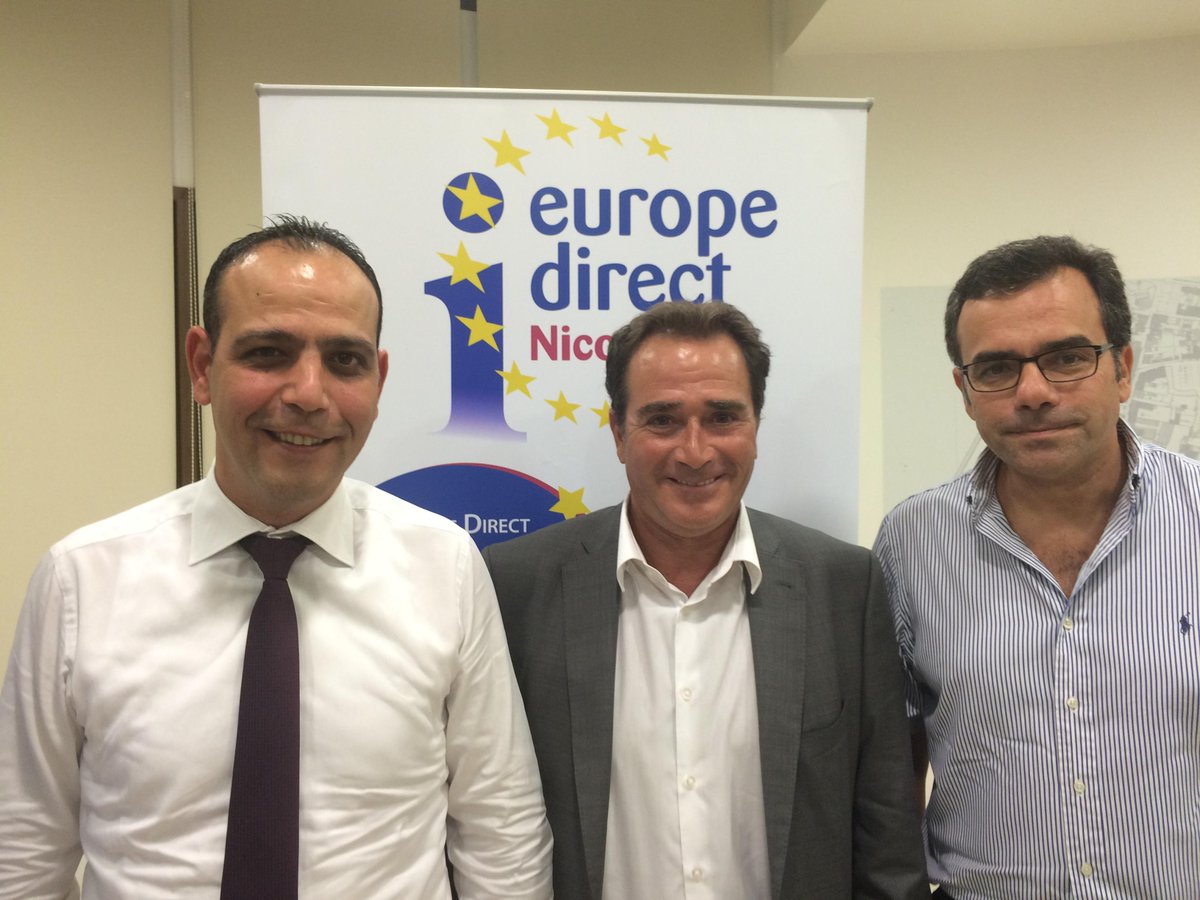 Europe Direct Nicosia was established in February 2015 by the Association for Historical Dialogue and Research EDIC Nicosia is co-funded by the European Union and is a part of wider Europe Direct network, which aims to provide accessible, user-friendly information to EU citizens about their rights and opportunities, as well as on the priorities, policies and programmes of the European Union. The citizens of Nicosia can be served in Greek, Turkish and English.

Initiatives such as the inauguration of the bi-communal Europe Direct Centre in Nicosia contribute to the final goal, which is the reunification of Cyprus within the arms of the European community, the Mayor of Nicosia,  Constantinos Yorkadjis highlighted.

Yorkadjis was addressing the inauguration ceremony held today, in the Home of Cooperation, in the Buffer Zone. The Head of the European Commission Representation in Cyprus, Georgios Markopouliotis, and the Turkish Cypriot, “mayor”  of the occupied part of Nicosia, Mehmet Harmancı also addressed the ceremony.

He underlined the challenges that Nicosia faces on a daily basis, stressing, though, that “empowered by the European values of democracy, justice, solidarity, respect of human rights and diversity, we remain focused and determined to achieve European fulfillment. We patiently await for a resolution to our national tragedy, the liberation and reunification of our country and our city”. Moreover, Mr Yorkadjis referred to the strong and stable European orientation of Cyprus, adding that the future of all Cypriots is in Europe. “And initiatives such as these act as a helping prelude to our eventual goal: The reunification of Cyprus within the arms of the European community”, Mr Yorkadjis said.

Upon welcoming the attendants, Markopouliotis referred to the crucial role of EDICs, namely to provide information directly to citizens on their rights, on EU policies and on any EU related questions. “Together with the Representations they make Brussels more accessible to citizens”, Mr Markopouliotis noted. He further expressed the hope that “residents of Nicosia from both sides of the Green Line will indeed use this tool we placed at their disposal”, stressing that the EDICs are there to serve the citizens, to help them better understand the EU and its policies that aim at improving citizens’ daily life.

Head of the Representation of the European Commission in Cyprus added that currently more than 500 Europe Direct Centres operate across the 28 member states of EU and the network has been a success story as it reaches out to the citizens in their own language. In Cyprus, he said, there are such centres in Larnaca, Paphos and Limasol.

Concluding, Markopouliotis quoted President Juncker, who reiterated this morning his hope, his ambition and his wish to see the island united next year, expressing his confidence that this is feasible under the current conditions.

Speaking on behalf of the Turkish Cypriot community,  Harmancı stressed the importance of the presence of the EU in the ongoing negotiations as a technical advisor. He pointed out that more bi-communal projects and initiatives should be implemented. “If there will be a solution soon, we will all have to work together”, he said, adding that, in order for projects to be implemented, EU financial support and guidance is needed.

He referred to the Aid Regulation for the T/c in 2006 and the amount of 256 million Euro the community was benefited from. He also said that they need more financial support to their common projects stressing that Yiorkadgis and himself want both the best for Nicosia. We seek for a solution and we must cooperation, he added. Europe should and must take more responsibility on the refugee, human crisis, he added.

Paraskevi Koumi, EDIC Nicosia Officer, highlighted the upcoming events that EDIC Nicosia is organizing, aiming to inform citizens about EU programmes and to promote EU values and opportunities. Events, such as film festivals, study fair, cycling, kid’s clubs, etc, contribute to a strong presence of the Centre within the residents of Nicosia.

The ceremony was concluded with music programme performed by the Bicommunal Choir for Peace, with songs sung in both languages, Greek and Turkish.