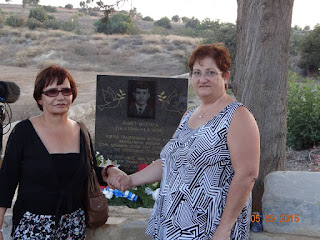 Leyla Kiralp was supposed to attend the conference in Brussels where Secretary General of AKEL, Andros Kyprianou and leader of CTP, Mehmet Ali Talat were speakers. She did not notice until she was about to get on her plane from Larnaka to Brussels that her Cypriot identity card had expired! She could not get on the plane and go to Brussels. She had been asked to say something about `missing persons` at that meeting in Brussels so she had written her speech. Although she could not go to the conference, AKEL MEP, our dear friend Takis Hadjigeorgiou, read excerpts from her very powerful speech at the conference.
I want to share her speech with you because I think it reflects the feelings of many relatives of `missing persons`, both Turkish Cypriot and Greek Cypriot.
This is the speech of Leyla Kiralp:
`Prior to 1974, many Turkish Cypriots and Greek Cypriots were taken from their homes, from the roads and from the fields, executed and buried in unknown places, making them `missing persons`. In the war in 1974, the number of `missing persons` increased even more. Many people were executed en masse and buried in mass graves. The burial sites of many of them are still not known… According to the figures given by the Cyprus Missing Persons’ Committee, 2001 persons went `missing` between 1963-74. Until now the remains of 603 `missing persons` were found and around 1400 `missing persons` are still `missing`. Relatives of `missing persons` from both communities have been through unbearable traumas. And these traumas still continue…